Here are a few more memories and photos for you to enjoy. Send yours to Living Gold Press for the next installment.

"When I-5 was completed, probably about 1962 my parents lived in Drain [OR] and my grandparents lived in Oakridge about 50 miles from Hwy 99 on Hwy 58 (the Willamette Hwy). Grandpa was one of those people who didn't like to be told he was wrong, and he wasn't a fan of progressive road changes. He had always taken the "shortcut" from Hwy 58 to Creswell, where he would join Hwy 99 and go on to Drain from there. The first time Grandpa and Grandma tried to go to Drain after I-5 was completed, it was no longer necessary to go into Creswell to get to Drain, but when Grandma tried to tell Grandpa this as he approached the newly-opened freeway connection, his reply was "This is the way we've always gone to Drain, and of course it's right!" But somehow he missed the turn onto Hwy 99 too, and Grandma tried to tell him they were going too far west, and he said,"no, this is the right way, you'll see", and Grandma said calmly, "Oh yes, I will." Eventually he figured out that they were headed for the Oregon coast and was forced to admit that Grandma was right.

Grandpa died in 1977, but my uncle who lives in Lebanon (his only son) is also a terrible navigator. I had the pleasure of circling the area near the Seattle Kingdom several times in 1988 after a Mariners game, after a construction project forced us to go south when we knew we needed to go north. My cousin and I tried to tell him how to get back to the freeway, but he would get to within a block of the correct street and say, "No, this can't be right" and turn around and go back the way we'd just come. After a trip up Beacon Hill, he finally asked directions and actually listened to them, and we found our way back to our motel." Anna

"When I was little and living on a farm outside of Fresno, our family went down to Glendale a couple of times a year to visit relatives. Going down, we normally would leave early in the evening after my mother got home from work in Fresno. In 1950 on one particular trip from Fresno when I was 6 years old and my sister 4, we had left Fresno very late.

We had a 1940 DeSoto Deluxe 4-door sedan, a large car with a very large rear seat. My sister and I had spread out all over this seat and had slept most of the way down. Around what seemed to be the middle of the night the car stopped and I woke up expecting to see Glendale. Instead what I saw was that we were stopped along a dark road and that my father was gone. I asked my mother where were we and where my father had gone. She said something to the effect that we had run out of gas and that he had gone to find some.

Some time later he came back, poured something out of a can into the car's tank, started the car with great difficulty and we lurched and chugged off towards Glendale. Just before I dozed off again he said something about "I think there's a truck stop near San Fernando..." A few years later I heard more of what had happened that night. 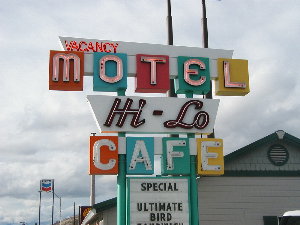 When we had left the farm in Fresno County that night it was very late, and my father had not topped the car's tank off, believing that we had more than enough to get to Glendale. This was despite the fact that we had gasoline on the farm for the cars and the tractors. He had either miscalculated or the car's gas gauge was wrong, because we ran out a good 50 miles before our destination. That late at night there was virtually no traffic on the highway, and even if he had been able to stop anyone to get a ride to an open gas station, the probability of getting a ride back was nil. Also, he didn't want to leave us alone in the car out in the middle of nowhere for what could be several hours.

My father had seen some construction equipment down off of the road behind us, so he decided to walk back to it to see if he could appropriate some gasoline. He walked back in the dark to where the equipment was parked, off of the road and down in a low area. He managed to stumble across an empty five gallon container, and was able to find by touch alone a fuel drain on a motor grader. He drained several gallons into the can, carried it back to the car and poured most of it into the tank. In those days the astute out-of-gas motorist always reserved a few ounces to pour directly into the car's carburetor should the car not restart easily.

The car of course refused to start after repeated tries, so he proceeded to pour a little of the gasoline into the carburetor. That's when he discovered that what he had drained out of the motor grader was not gasoline but instead was distillate oil, a kerosine-like fuel used by some older farm tractors and construction equipment. That stuff was hard enough to ignite with a match, let alone burn in an automotive engine. Most of the modern equipment in the late 1940's and early 19050's ran on gasoline, but he had managed to find something old. He did somehow manage to get the car to start and keep running- sort of. Apparently we had stalled near the top of the grade, because it wasn't too far before we were able to start the downgrade into San Fernando Valley. He was able to find a gas station that was still open and filled the tank. Once the gasoline diluted what remained of the distillate oil, the car ran normally again.

The equipment that he had found and liberated of some fuel was being used for the construction of the 1951 expressway project."

"My address as a child and for 21 years was Highway 99 in Vancouver, WA. My father owned a barber shop that sat in front of our house. I remember when Interstate 5 was built. I was fascinated when we drove to California on Highway 99 when I was fourteen and we stopped for gas near the Grapevine in Southern California and noticed that we had not left my home street because the address on the gas station was also Highway 99!" Teresa