One of the pleasures of having published three books on Highway 99 is receiving letters and emails from readers. Reminiscing seems to be the key to being a 99 fan, so I will share some of the memories with you. 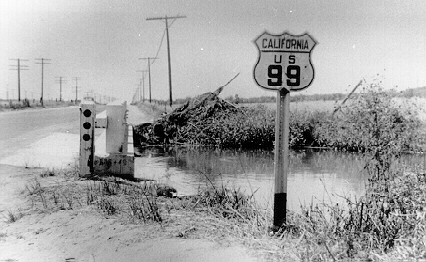 "My much older cousin had driven trucks for 8+ years over the old Ridge Route for Chesney Oil Tool Co. beginning in 1924. He enjoyed recalling those years and I always loved to listen. Each trip was a five day adventure. It was very close to two full days from the Long Beach Harbor/Signal Hill area to Bakersfield and over 50 hours to the Kettleman Hills. When he got tired his relief driver took over? Afraid not. One driver straight through, rest a day and return. In the mountains it was hour after hour at one mph uphill and down. By 1924 most of the blacktop cuts had been added. Trucks had to stay on the concrete and cars could pass on the other side. Still, cars trying to go slow uphill often overheated or lost a clutch and blocked a lane in a narrow portion. Many times on each trip the drivers would set the wheel and throttle so they could get out and walk, either to wake up, exercise, check the load, or in summer to get away from the hot engine. I can remember 35+ years ago seeing drivers standing on the truck running boards to cool off. The fun part of the trip came at the bottom of the Grapevine when they stopped and changed the drivechain to double their speed to 50 mph. Many inexperienced drivers had trouble a little ways north not realizing they were still on a downgrade. The truck brakes were very poor in those days." Dave

"One of the things that my sister and I remember on our many travels into Oregon [up 99] were the old operating tee-pee burners next to the sawmills which burnt 24 hours a day along the old highway. When we would travel into Oregon late at night, you could see the bright red-orange glow, along with small flying sparks and embers that slipped through the wire mesh cones on top. Another thing that fascinated us as kids riding in the back seat were the old colorful semaphore signals that ran all the way from Weed, CA into Oregon along the old Southern Pacific Siskiyou Line right-of-way. Maybe it was those big colorful lenses and colored blades that caught our eyes as children." Doug

"As a kid growing up in California, I spent a lot of time traveling on Highway 99 and indeed looking at Highway 99. For three years our family lived in a house in Tulare that was the last house in a block adjacent to the highway, with only a fence and a third of a mile of fields between our backyard and the highway. As a boy I spent hours with my friends looking at the cars and trucks going back and forth and learning how to name them by make and model. We had family in LA while we lived in Tulare and Fresno and went back and forth by car and bus several times a year. We went north about once a year to Stockton for ten years. As a result of all of these travels, I got to know Highway 99 pretty well.

Probably my most vivid memories are of the Grapevine and of the valley fogs. The Grapevine was really a challenge for the traveler when I was a young boy. The cars of the late 40s and early 50s that I rode in could barely make it up the Hill from Bakersfield. They usually overheated. All of the cars had canvas water carriers strapped to the front fender, which were used at turnouts when the temperature gauge got too high. Going down the Grapevine wasn't much better. The brakes on the old cars often gave out on the steep grade. The trick was to put the transmission into second gear and keep your foot off the brake. Of course, I wasn't driving at the time, but I learned all of this from my father or uncle. And then there was the heat. From Bakersfield to San Fernando, the entire Ridge Route was usually baking in the sun causing not only overheated cars, but overheated passengers.The valley fogs were really something. I remember fogs so thick that you could hardly see the hood ornament that would set in for weeks at a time. The fog made driving on Highway 99 a real adventure in risk taking. In junior high I would walk to school and on many days my friends and I would have to feel along the fences and street posts to find our way."

"My folks were real gypsies and so we spent a lot of time traveling about by car during the fifties. I liked the traveling even more than playing baseball. We lived in Southern California at the time and while we seemed to travel on 66 more than 99 I remember both roads quite well. Any time we went to downtown LA we would always get something to eat at Phillipe's luncheonette. My mom, bless her heart, always pronounced it "Flip-eeze." Food was cheap and good and the place had a real ambiance about it with the sawdust on the floor and all. I don't know why out of all the places we ever ate at that really stands out in my memory. Maybe it was because it was the only place we ever went in the Big City." Gary 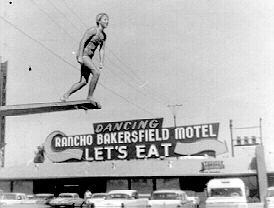 "We started traveling up and down 99 through the Central Valley between Davis and southern California when I was only 3 1/2. I would have to say the most memorable image of those trips is HEAT. But if you've never had air conditioning, you don't expect it, and it really wasn't all that bad. We stopped frequently for cold drinks and snacks of fresh fruit. As the miles rolled along, my sister and I might fold up the back seat in the station wagon and play "house" inside the resulting gap. It's hard to imagine that seat belts weren't even invented yet. We often made a two day trip of it, staying a night at the Rancho Bakersfield leaving plenty of time to swim in the late afternoon. But on one hot summer's drive through the valley I had a raging case of the flu. I lay face down on the seat sweating and trying to control my nausea, my cheek stuck to the vinyl. That was a long trip!

Then there was our hurried trip across the Yolo Causeway before the rising flood waters in December 1955 closed the road. We weren't planning to leave Davis until the next morning, but if we wanted to get to my Grandmother's in southern California for Christmas we would have to leave that night. It was very dark, it was pouring, visibility was terrible, the road was packed with cars and the water was lapping at the edges of the bridge. But the presents were safe in the back, all wrapped neatly in the same angel paper, and I had implicit faith in my father"s ability to get us over the bridge and on down Highway 99."

There you have it. Feel free to share your memories, too. It would be nice to hear about some other parts of our favorite highway. Email Us! or write to us at PO Box 2, Klamath River, CA 96050