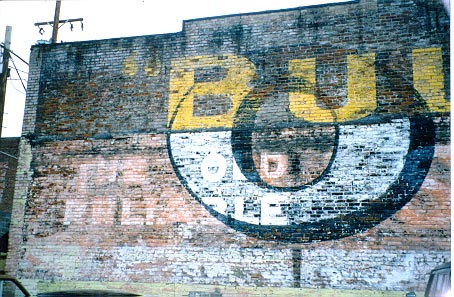 MORE photos, plus
Oral History of a real-life WALLDOG

There are so many things to look for when exploring along the old highways and through the older parts of town. One aspect of the treasure hunt is seeking out faded and peeling advertising signs that have been painted on walls. These are sometimes called “ghost signs", and the painted images can indeed be “ghostly” when you try to decipher the original words and images. There may have even been successive ads painted on a particular wall -- especially if it was in a prime location -- so that the several layers of paint in their various states of decay now extend quite a mysterious message! 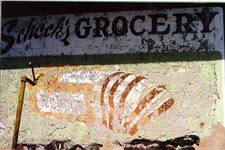 Some wall signs are well preserved decades after their painting. That is true especially where a wall has been protected from the elements. The durable lead-based paints used in the early to mid-20th century are another major factor. Some of the old signs have been repainted, the attempt to match the color and charm of the original not always successful. Coca-Cola signs are a favorite to preserve. Still others continue to fade away, one flake at a time. 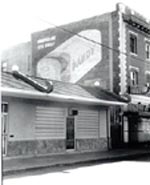 But of course, these signs were never intended to be “charming” or “picturesque.” They were nothing more than a highly visible form of advertising placed in conspicuous locations for the purpose of soliciting business.


The sign painters, however, were undeniably skilled artists, even as they were fast in their execution. The “wall dogs” as they were called, generally worked for one of the major sign companies. There was a city contingent and a free-ranging countryside contingent that concentrated on barns and walls in the smaller towns. The painters were an eccentric lot, not surprising given their roaming lifestyle.

They traveled from town to town painting the signs on walls that were usually prearranged by company representatives. The owner of the wall was often given a “privilege” for use of the wall. That is, a smaller ad for their own store or café or whatever was painted above or below the ad for the national product. The painters mixed their own paints to exacting colors. From scaled drawings they executed the design onto walls, making sure the lettering was level (even if the wall wasn’t) and that it fit properly into the allotted space.

A wall sign might also be a purely local production; a local painter painting a sign to advertise a local product, or advertising the establishment within the very walls on which he painted!

I personally seem to have run into quite a few painted loaves of bread. Other common products advertised by wall signs were soft drinks, coffee, beer, and of course tobacco. I was thrilled to find a Mail Pouch Tobacco sign on a historic barn not far from Roseburg, Oregon. I didn’t think relics like that still existed. Well, sadly, it was torn down in 2013. But we discovered another Mail Pouch barn in a cotton field in Merced County, CA while researching our That Ribbon of Highway II revision in 2010.

Keep your eyes open and you might find some treasures yourself! 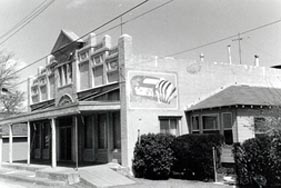 Go to Mail Pouch Barnstormers to learn all about Mail Pouch Tobacco wall and barn signs.