Highway Bridges, A Fusion of Art and Function:

Another early bridge design, suspension bridges are structures with decks suspended on cables that are supported on towers. The cables extend beyond the towers on either side and are anchored into the ground. The same man who invented San Francisco's cable cars pioneered the building of wire cable suspension bridges, with the first such structure built to span the remote Klamath River way back in 1861. Surviving early suspension bridges range from rough back country structures to the stupendous Golden Gate Bridge, built in 1937. This type of bridge design has the advantage of not requiring falsework (a wooden framework) during construction, useful when crossing a deep gorge or large body of water. The components were easily transportable to the point of the cables being rolled up and carried on pack trains into the remotest locations. 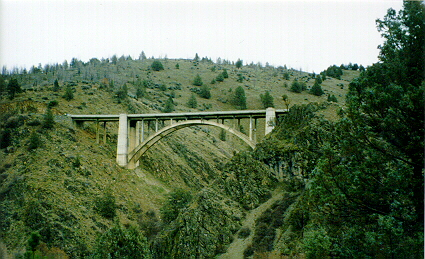 The proliferation of railroads in the late 1800s brought a flurry of bridge building. The railroads favored timber trestles for small low bridges and iron or steel trusses for larger structures. The raw material for the latter was brought from the east. The technologies and materials were already in place when the need for highway bridges arose soon after the turn of the century. Thus many of the earliest California highway bridges were built by the same bridge companies from designs similar to the train bridges, and in some cases actually were recycled train bridges. Some built specifically for the Highway Department by these private companies were notoriously light in weight and under bracedthese were known as howlers, rattlers, and squealers. Older truss bridges still in use often have weight restrictions or have been reinforced, but by and large have proven durable. Some have even been dismantled and moved to new locations.

An interesting variation of metal truss bridge is the movable bridge. Much of the action in early California took place in watery regions, the San Francisco Bay Area and especially upriver from there around the inland sea port of Sacramento, the state capital. This city is located in a large delta area where several rivers converge. There are hundreds of miles of waterways interspersed by settlements and farms. Where wheeled traffic and river traffic met, movable bridges were built. The earliest were swing bridges, with a section of the bridge swinging open like a gate to let the water craft through. They were simple to build and operate, but were slow and required large piers in the center of the shipping channel. A few remain but most were replaced by more practical bascule bridges having spans that are pulled upward on hinges, and vertical lift bridges. The modern trend is to replace movable bridges with relatively uninteresting high fixed spans requiring no manpower or motor maintenance. 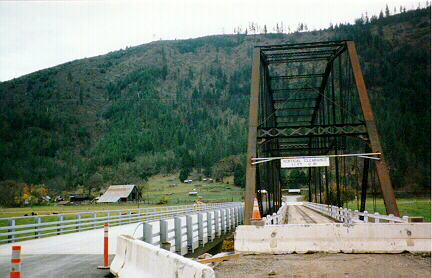 Those boxy metal truss spans that could be ordered up in standard designs from the bridge company catalogs served the purpose of facilitating California highways expansion at a good pace in the first fifteen years of the twentieth century. But soon enough the public and the bridge engineers alike yearned for something more pleasing to the eye than these cold metal geometric structures. Concrete became the new material of choice. It was strong when reinforced, cheaper than steel, plentiful in California, and could be formed into all kinds of graceful shapes.

Metal truss bridges were the product of an era exemplified by a rigidly adhered to railroad timetable. The automobile era of the early twentieth century, in which the freewheeling roadside camping automobile "gypsy" with no particular schedule or destination (within the confines of the two week vacation from work, that is) was the ideal, brought a new creativity in bridge design. A major turning point was the implementation of a two cent per gallon gasoline tax in 1923. That legislation assured a steady source of funding, the state took over all of the bridge building responsibilities from the counties, and the bridge designers at last had the freedom to produce structures beautiful as well as functional.

A modern freeway bridge does Trojan duty but is not usually awe-inspiring to the average viewer. Perhaps the premier bridge form to emerge from the early part of the century is the concrete arch, very common but always impressive, a style that came to be recognized throughout the country as classically Californian. Division of Highways engineers designed and built dozens of them in the 1920s and 1930s. The prevailing philosophy of the era emphasized the need to build attractive structures on the remote, scenic stretches of state highway, with architectural details that would enhance the setting. The bridges' enduring beauty and serviceability attests to the good sense of these men.

California highway bridges are not, of course, limited to the forms mentioned in this article; more detail is perhaps beyond the interest of most SCA Journal readers. Although more understated by their nature; their functional lines and earthy colors, highway bridges are in fact clearly as much a part of the cultural landscape as a classic diner or bright neon sign. The accompanying photographs are but a small sample of the wonderful structures to be seen along our roads.