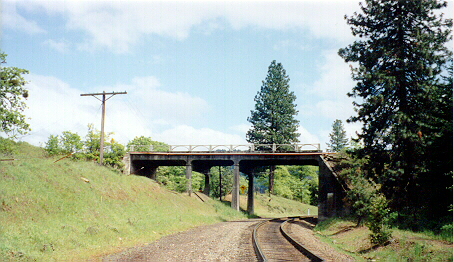 Highway Bridges,
A Fusion of Art and Function:
A Northern California Sampler

� Jill Livingston
(This article was printed in the Society for Commercial Archeology Journal, Vol. 15, Number1, Spring 1997.)

Californians seem to have always been uniquely bonded with their automobiles. Distances in the state are far and terrain is varied, ranging from the highest point (Mt. Whitney) to the lowest point (in Death Valley) in the continental United States, encompassing several mountain ranges, large fertile agricultural valleys, wide-open deserts, hundreds of miles of Pacific coastline. Not all of the widely separated towns and cities were linked by the railroad when it was completed in the late 1800's, as were few of the natural wonders that tempted the recreation oriented Californians into frequent vacations. These were some of the factors that served as an impetus for rapid highway development in the state.

While highways likely evolved similarly all over the country--changing through the decades from pathways into wagon roads into narrow paved automobile roads into freeways--the state of California faced a great challenge in the effort to provide the thousands of miles of safe all-weather roads that the public was demanding by the first years of the twentieth century. 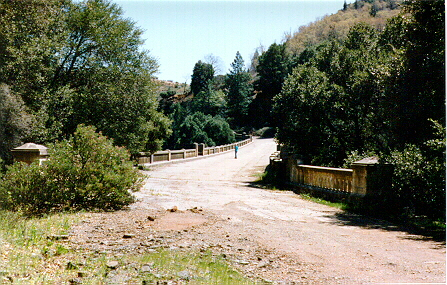 The California Highway Commission was established in 1895. Not surprisingly, the new-born bureaucracy was initially short on both money and power although the Commissioners did possess a strong vision. Their first noticeable efforts centered on the Lake Tahoe Wagon Road (eventually to become Highway 50) over the Sierra Nevada mountains. In fact, much of the early road work was done in this Mother Lode country that had first seen a major population influx in the 1849 Gold Rush.

Building a paved highway in level country was hard enough; building in the mountains presented special problems. Thanks to a series of bond issues, beginning in 1910 the Highway Commission actually had some money to work with. The goal was to grade and pave as much of the new State Highway System as quickly as possible. The more visible the improvements, the more likely the public would be to vote in favor of the next bond issue. Even though the original highways consisted of a humble unlined strip of concrete only fifteen feet wide, progress could be frustratingly slow. For one thing, the strips of highway were interrupted disconcertingly often by obstacles that needed to be crossed--rivers and streams and seasonal stream beds in the valleys; the same obstacles plus gorges and canyons and arroyos in the mountainous regions. If the geographical feature could not be forded or detoured around within a reasonable distance, other solutions had to be found. And so began the technology of bridge building.

The first era of bridge construction in California was in the pre-automobile, pre-Highway Commission days of the mid to late 1800s. Many of the early roads were privately financed toll roads. Along these crude roads, larger rivers were crossed by ferries, narrower channels by makeshift log bridges built using the simplest of tools. Aesthetics was not an issue (although, being made from the native materials close at hand, they were bound to be attractive, or at the worst unobtrusive), and neither was durability, it seems. Bridge failures were not uncommon with the first high water or heavy load. 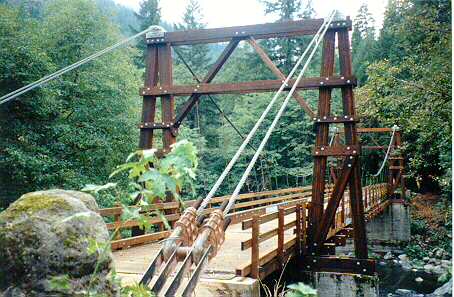 More frail than log structures were the timber trestle type bridges built in unforested areas where the raw materials had to be brought in--it was easier to haul hewn timbers than raw logs. Often jerry-built with inadequate foundation and bracing, stage coach passengers were forced to disembark and walk over the worst of them.

Eventually a little more thought was put into bridge design, resulting in some bridges that were still around when the automobile era commenced. Timber truss bridges (a truss bridge being defined as a jointed structure whose individual members are connected in a triangular pattern) brought an old (16th century) design to a frontier land. Covered bridges were wooden truss bridges with a roof and siding added to increase the bridges' longevity, as well as to please future generations, it seems. Unfortunately, wooden bridges were found to be more vulnerable to destruction by fire with the coming of motor vehicles, usually caused by a collision on the deck. Initially, water barrels were maintained on these bridges, but it was impractical and expensive to keep the barrels full, and wooden bridges gradually fell out of favor. A little later, combination truss bridges, made of wood and metal, were constructed and by the turn of the century, metal truss bridges of iron or steel were the most common bridge encountered. They were put together in various configurations, given names such as Pratt Truss or Baltimore Petit by the designers, and often patented. Next Page