Everyone's Asking!        Just what is the origin of this familiar "Sam Hill" question? Answer.

Yes, Sam was a real guy. Once we at Living Gold Press started investigating old US99 through the northwest his name kept popping up.

As it turns out, Sam Hill, or at least the Sam Hill we are interested in, was an early champion of the Pacific Highway, as the northern 2/3 of US Highway 99 was known before it was assigned its number in 1926. Sam was a man with a vision.

Of course it takes more than one man's vision to build a highway, or any large complex public works project for that matter. All along the line, in each of the states and counties and towns that this road was to pass through, it took men with imagination and energy to help bring the dream to reality. Sam Hill was "the main man" in Washington and Oregon.

Mr. Hill's background was in railroads. His father-in-law/employer was head of the Great Northern Railroad. The Hill family came west from Minneapolis in the late 1800s, taking up residence at the railroad's terminus in Seattle. It wasn't long before his auto road ideas began to coalesce.

Now if it seems that roads and railroads are incompatible, that was not the case early in the 20th century. It is true that eventually the two types of road became rivals, and the highways ultimately dominated. But back in the wet and muddy turn of the century northwest, people could barely make it to the railroad stations, farmers had a hard time bringing their produce to railheads, and population growth (having a wholly positive conotation in that era) would be slow unless the roads were improved.

Inspired by a 34 mile road trip that was short in distance but long in hours, Sam Hill vowed that he would build a hard-surfaced highway all the way from the Mexican border to the Canadian border, and all the way up to Vancouver, BC. To spearhead the effort he organized the Washington State Good Roads Association in 1901. Their expressed goal was to build an organized system of hard surfaced roads, for what already existed was a messy, unsigned, unsurfaced confusing assortment of private, city, and county roads. Additionally, no road in the planned system was to exceed a 5% grade, no mean feat in this mountainous country. What would later be called US99 from the US/Canada border to as far south as Stockton, CA was part of the planned mix. 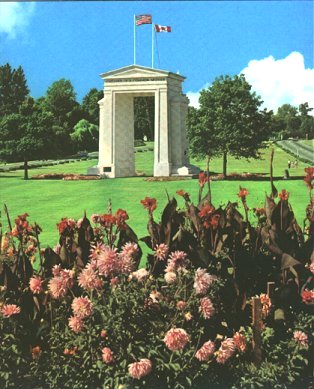 So Sam and his cronies talked and pushed and prodded and talked some more, and things started happening. A Highway Commission was formed in 1905. By 1913, construction of the Pacific Highway through Washington was begun. By 1923, it was about complete. (But of course we now know that they only thought it was complete. They couldn't imagine the day a state highway would need to be wider than 20'!)

Sam Hill was not just passionate in his efforts to get the roads built. He experimented on his own in how to build them as well. On the grounds of his Columbia River gorge estate, Maryhill (now an art museum ) he built ten miles of road (not to mention a replica of Stonehenge). At Maryhill, Sam experimented with different road building techniques and surfacing materials. Those were the first paved roads in Washington.

As if all of this wasn't enough, Sam Hill left an even greater legacy. He is the man who proposed and headed fundraising efforts to build the International Peace Arch at the US/Canadian border alongside the Pacific Highway.

The pretty white monument honors the longstanding peace along this border and between Canada and the United States. It was dedicated in 1921.

The 40 acre Peace Arch Park also straddles the international boundary. It can be enjoyed by citizens from both sides of the 49th parallel without the formality of clearing customs. And enjoy it they must, for besides being home to 200 perennials, 55,000 annual flowers are planted there every spring.

The Answer (such as it is):

It appears unlikely that the exclamatory question refers to "our" Sam Hill, since language expert Michael Quinton of ­­World Wide Words traces the expression back to the 1830s, before "our" Sam Hill's birth. Moreover, Quinton, a contributor to the Oxford English Dictionary, believes the expression is most likely simply a sanitized version of "What the hell?!" and thus refers to no flesh and blood Sam at all.

Still, some sources refer to a Connecticut politician who ran for office frequently (i.e "run like Sam Hill"), and a helpful reader sent me a photo of a sign that settles the question to the satisfaction of residents of Marshall, Michigan, if not for anyone else.