We dedicate this topic to Alfreda Ward Maloof, author of Recollections from My Time in the Indian Service 1935-1943/Maria Martinez Makes Pottery published by Living Gold Press in 1997. Freda passed away on September 23, 1998 at the age of 86. She was an exceptional woman who was sometimes overshadowed by her famous husband. We are so pleased that we were able to bring a bit of her story into print. Freda was a private person, and even some close friends were unaware of this chapter of her early life.

We focus on Winold Reiss, a German born artist who befrinded Alfreda after her transfer from New Mexico to the Browning Museum of the Plains Indian in Montana. The original pastel drawing,Wolf Child, which is reproduced in Recollections hangs on the wall in the Maloof home, a gift to Miss Ward from Mr.Reiss so many years ago.

How did Winold Reiss wind up in Montana at the same time as Alfreda Ward Maloof? His presence there seems to have been a partial fulfillment of the dream he had nursed since he was a young man studying art in Germany. Winold's father, Fritz, had been fascinated by the picturesque German peasants and moved his young family to a small village in order to indulge in his passion to paint them. Winold later developed his own obsession for "ethnic" portraiture, but it was the romanticized American Indians of his boyhood reading that he most wanted to paint. 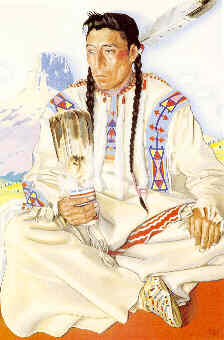 And so, when in 1913 in his late twenties, Winold Reiss left Munich for New York. It would be some years before he would be able to paint a real Indian in real Indian country, but the man was not idle.

He worked for a time as a successful commercial artist and interior designer to pay the bills, work that did not completely satisfy him. Winold had assumed that in America, the native peoples would be living in the countryside surrounding the cities, as had the German peasants in his homeland. This was obviously was not the case, but the occasional Native American showed up at his studio and donned an outfit for the sitting that perhaps was not of his own tribe. This was not the situation Winold dreamed of for so long. 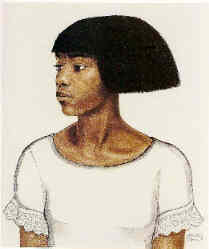 Harlem Girl I
pencil, charcoal, pastel on board, circa 1925
Museum of Art and Archeology, University of Missouri-Columbia:gift of W.Tjark Reiss

His first tantalizing trip to Montana took place in 1919. Subsequently, Winold gained recognition for his portraits of African Americans and Harlem residents during the Harlem Renaissance of the 1920s. He traveled to Mexico to paint peasants in that country, part and parcel of his goal to record non-western racial variety.

It was not until 1927 that Winold found a way to return to Montana, and this time he got paid to go there. He was an employee of the Great Northern Railroad, was given a studio in a Glacier National Park hotel, and painted to his heart's delight a steady stream of Blackfeet Indians during the summer season. 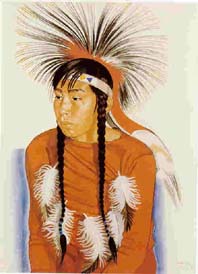 Nobody Has Pity on Me or Burton Bearchild
tempera, pastel ,charcoal on paper, 1948
Burlington Northern Railroad

At season's end, the railroad selected which of the numerous portraits would grace their famous calendar for the following year.

This arrangement continued for a number of years. From 1934 until 1937, he held summer sessions of the Winold Reiss Art School at Glacier Park. He returned to Montana in 1943 and made his last visit in 1948.


The portraits and the above information were taken from To Color America, Portraits by Winold Reiss published by the Smithsonian Institution in 1989. Unfortunately, this book is out of print. A traveling exhibition, Rhaposidies in Black: Art of the Harlem Renaissance features some of his fine portraits and prints. You can also order some very inexpensive copies of his work from our associate, Amazon.com by clicking on: Six North American Indian Postcards or Blackfoot Indian Portraits